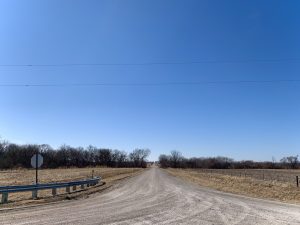 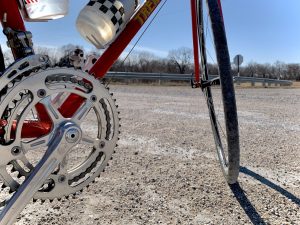 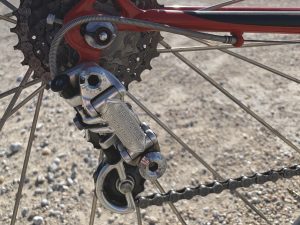 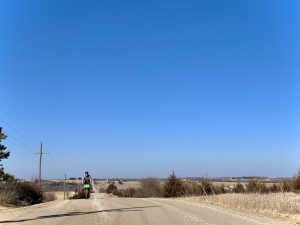 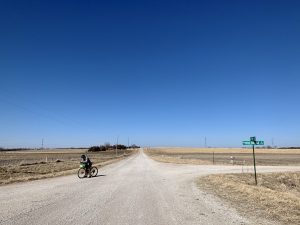 While looking ahead a few weeks ago, I put in a request for a vacation day. There is a bicycle swap meet at Zipline Brewery here in Lincoln every year in the spring. I always enjoy the event and wanted to make sure I could attend. The boss (Jason) approved and since he was already off that day, and planning to attend the swap meet, we decided to go for a ride.

My usual gravel bike (All-City SpaceHorse) is out of commission. I have been scheming on a rebuild over the winter and the bike is in various bits all over my garage/home. So I have been riding my 1986 Trek 660 road bike. It is a dynamite machine.

The bike was given to me by a friend last fall and I am entirely in love with it. I have heard people talk about feeling that their bikes are an extension of their own body before. Jan Heine, in particular, has always invoked jealousy in my soul with his descriptions of such things. Yet I had never experienced it before for myself. Riding this bike is like that. It disappears beneath me and I forget that I am riding and focus on the world around me. I don’t consciously turn the bicycle, my brain picks a line on a descent and the bike slides into it as if I were simply moving my hand to pick up my coffee cup. No effort, no consideration. Intent and action. Seamless and instantaneous. Of course, I know that the bicycle is not a part of me but the symbiosis results in pure joy and continual smiling.

Being an 80’s road bike the tire clearance is not expansive. 28mm is the ceiling. Those 28s provide enough clearance to allay any concerns but 30s would be too much. This does not bother me. I love 28mm tires. I have spent plenty of time on gravel roads on equivalent or skinnier tires. However, it has been a while since I did such riding with much frequency. Last year I spent most of my time on 40mm Gravel King SKs (on which I plow through what lay before me without care or consideration). My previous rides on this bike have been on 23mm tires that were on the bike when I got it. For this ride, I wanted some more tire.

Upon receipt, the Trek was completely original with one exception, the wheelset. I had recently replaced the original handlebars, brake levers, and stem with a more modern cockpit. A Nitto Dynamic stem, 46cm Noodle handlebar, and some TRP brake levers. All topped off with PDW’s new Pizza slice handlebar tape (for reasons of class and sophistication). Before our ride, I pulled the wheels off of my other Trek road bike (2011 Madone 5.2) and swapped out the ten-speed cassette for a seven-speed 11-28. After installing these wheels, with their 28mm tires, I was ready to roll.

It was an incredible February day. With temperatures in the high 50s. We decided to ride to the brewery and then strike due west out of town and into the gravel. The wind was from the South-West (more West than South) so we would ride into the wind, turning South for a spell before making our way back to town. Jason had to dog-sit in the afternoon so we didn’t have all day for lollygagging (#lollygraveling?). That was fine, neither Jason or I have been getting any long rides in during the cold winter. We planned on 30 delightfully crunchy miles of good ol’ Goodlife gravel (read: Nebraska Gravel, for those of you not here living the Good Life. It’s not for everyone, after all).

We rolled out of town and onto the gravel. The sun was so shiny and the roads were so crispy. Jason always “plans” our route. I am not sure if he really enjoys it, but he is good at it and I never know where we are/don’t pay attention. So he takes on the task and gets us to our goal in the most enjoyable manner possible. I appreciate this greatly.

Lately, I have been practicing self-restraint since last spring when I fell into a hole of muscle strains and joint pains that kept me from all the fun I had intended to have on my bike. I am working hard to build up my form gradually so I can ride really hard and really far in the summer and fall. Even attempting some cross-training to strengthen my core and stabilizing muscles etc. etc. So, on this ride, I did not follow my preferred method of charging up every hill, as hard as possible, in the gear I pedaled through the descent. I allowed my new seven-speed cassette to reach its full potential. There will be plenty of time for full-gas attacks later on (particularly, when my friend Ryan least expects it). I’ll be faster then, anyway.

For the first 5 miles, or so, the skinny tires caused some timorous downhill sections on loose gravel. I was very careful and intentional about picking out the best section of the road. When climbing, my rear tire would slip and spin slightly as I pushed on the pedal before catching hold and driving the bike upwards. Then, as we settled in, I found my rhythm and the bike took over. I stopped thinking about the descents and dove into them, enjoying the sensation of rolling over little dips in the road, shifting my weight slightly to smooth out the transition and stay balanced. I hopped out of the saddle for the uphill portions and centered my body over the bike to give my tires firm purchase on the loose surface of the road. I completely forgot that earlier in the ride I had struggled to keep from slipping.

What followed was a fantastic display of Eastern Nebraska landscape. Fields, and farms, and scrubby patches of trees. Small valleys with tall grass that blows in the breeze and homes throughout it all that display the way our world has changed over the years.

The ride was perfect. Jason and I reviewed various subjects, including bicycle parts, binoculars, hammocking, and how much we like being outside. The sky seemed bigger than usual and that is saying something, for Nebraska. The sun was so warm and the 30 miles flew by. Our return had us riding with the wind for quite a while and on pavement for a bit as well. We scorched through those miles with little effort. I enjoyed the contrast of the speed and smooth surface to the earlier miles of gravel, I like all the roads.

The only unfortunate aspect of the ride was that I forgot to pack any snacks and that I enjoyed myself so thoroughly that I neglected my water bottles. This resulted in some odd foot cramps. So, next time I’ll bring snacks.

When we got back to town, Jason and I parted ways and headed off to our homes. We are always in the middle of a conversation when it’s time to split off onto different paths. Usually, it ends with a hasty “well, goodbye. See you tomorrow!” hollered over the shoulder. It always reminds me of saying goodbye to my friends as a child as I was running away because it was time to go home for supper.

The moral of this story is twofold: Sometimes one needs to take a vacation day for an ordinary bicycle ride. Good weather in February should not be wasted.

+There are no comments